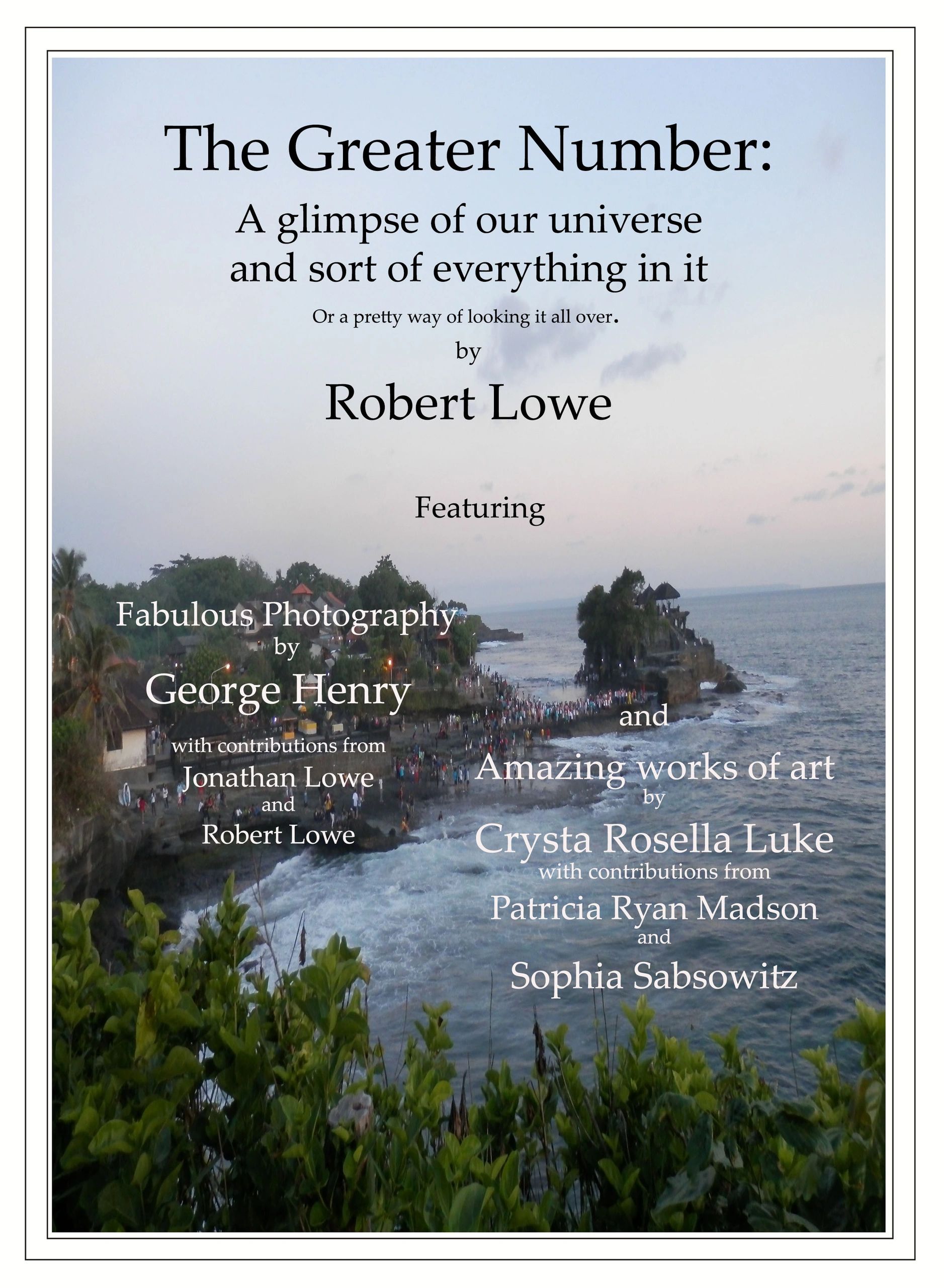 Things I Have to Say

Back cover of The Greater Number

The Greater Number Back cover.

See my opening opening page for the front cover.

My view of the positive nature

of life on our planet.

Front and back slip cover panels

First published in North America in 2000, as

Back Cover of Improvisation, Inc.

Entering the magical time through

Enhanced Simulations  My chapter is "Beyond Psychotherapy: An Introduction to Applied Improvisation Beyond Comedy and Before Therapy"  The whole chapter is available here.

(Scroll up to see cover)

Twenty eight therapists exploring uses of their therapy skills and experience beyond therapy.

Retired and Loving Every Minute

Robert Lowe is a retired Improvisation elder. He was the founder, and chief executive of Improvisation Incorporated, a pioneering educational consulting firm specializing in the use of Improvisation Theater techniques for organizational development, and for business, professional, and interpersonal communication. His work included such early clients as AT&T, Georgia Pacific Corporation, The Southern Company, Medtronics, Inc., the Government Services Administration, Metro Atlanta Rapid Transit Authority, the Southeastern Regional Association of Girl Scout Executives, Centers for Disease Control and Prevention, Georgia Baptist Medical Center, the Fulton County Staff Development Council, and the Center

In his thirty-nine-year exploration of Improvisation, Lowe has been a dancer, a player, a teacher, a director, and a mentor in the uses of Improvisation for purposes beyond performance.

He has taught Improvisation and stand-up comedy, public speaking and presentation, and community and personal advocacy in a variety of venues.

Robert Lowe has been a management consultant, a public speaker, an adjunct university professor, a corporate vice president, a national sales representative, a program analyst, a project director, a welfare supervisor in the San Quentin district of Northern California, a customer service manager in South Central Los Angeles, a U.S. Navy officer, a legal services paralegal and community educator, and a legal secretary. He has been a Boy Scout executive, a corporate collector, a carpenter, an electrician, a political activist, a community activist, an advocate for handicapped accessibility, an actor, a dancer, a meditator, a poet, an historian, and a philosopher. He is also an Eagle Scout, which pleased his mother and father to no end.

Robert was a teacher with the Department of Communication at Georgia State University for twelve years, specializing in “Human “Communication”, “Public Speaking”, “Business and Professional Communication”, Voice and Articulation”, “Acting I”, and “Special Studies in Improvisation” during which time he received the honor of being named an Outstanding Part-Time Instructor.

Lowe holds the rank of Nidan (second degree black belt), and the status of Fuku Shidoin (teacher) in Aikido, with over twenty-two years on the mat, including more than seven years specializing in teaching children. His articles have been published in “Aikido Today Magazine” and “The Journal of Asian Martial Arts”.

More than anything else, Robert Lowe is a man who one day nearly 40 years ago found the power of focus on the current instant, and has been unwilling, and unable to let go of its pursuit for even a moment since. When he talks about Improvisation, and about creativity, and about the human spirit, and about the power of spontaneity, and the salvation of human collaboration, his eyes light up, the air crackles, and his feet only

He truly sees the explosive development of Improvisational Thinking as the next, and most vital, step in the evolution of human culture.

Robert grew up in a neighborhood which had one of the highest juvenile crime rates in America between 1950 and 1970. There were youth gangs in the schools before it was the fashion, and motorcycle gangs on the streets where he learned to walk in awareness and hope. He worked in poverty communities in South Central Los Angeles during the “first” Watts Riots. Through an era of revolution and evolution, he has seen the world come abruptly against itself only to find the desperate need of some real personal, internal, and creative human work in human cooperation.

Robert spent 10 years in an extraordinary community of communes, social services, and politics during the time of radical change between 1970 and 1980, just before discovering Improvisational Dance in San Diego, California. His second book, Happy Vernday Birthcox: Revolution, Evolution, and an Uncommon Commune – 1970, a true story, was published in 2015 and tells of the extraordinary people and times that prepared him for a life engaged in Improvisa

One hopes to have some experiences and some wisdom to share.